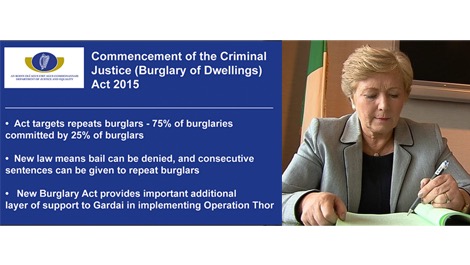 The Criminal Justice (Burglary of Dwellings) Act 2015 which came into effect yesterday means bail can be denied to repeat burglars. In addition, consecutive sentences can be given to those convicted of serial break-in offences.

“Burglary of a person’s home is a heinous crime and traumatic for every victim. This important new act targets repeat burglars. It will help keep repeat burglars off the streets and improve the safety of our communities,” said Ms Fitzgerald.

The minister hailed the new move as “an important step forward” in the fight against the country’s “hardened cohort of repeat offenders”.

In terms of bail applications, the new act stipulates that a previous conviction for domestic burglary, coupled with two or more pending charges, can be considered as evidence of likelihood to commit further burglaries.

If there is no evidence to the contrary, this provision allows for a court to refuse bail on the grounds that the accused is likely to re-offend if released.

The new law comes as recent figures reveal seven out of 10 of the most serious crimes against property are going unsolved. Non-detection rates in some Garda districts are over80%.

The figures also show only four out of 96 Garda districts solved more than half of the robberies, burglaries and thefts in their area last year. These are very worrying figures.

If you have concerns about your current security arrangements in the home or business then contact us today on 045 872090. We provide a comprehensive range of robust security services.